Migraine deliberately excluded from the Census 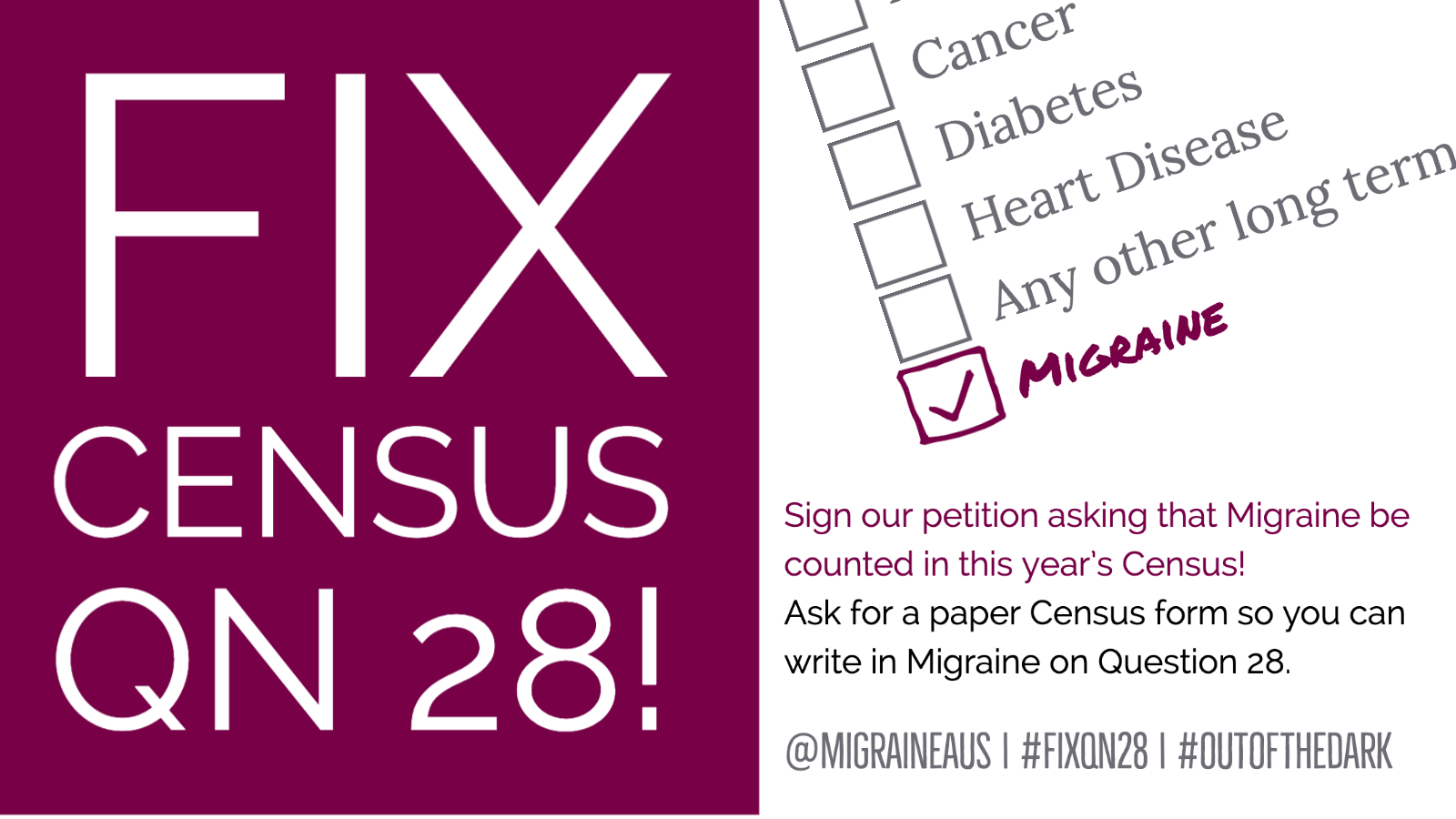 Can you believe that migraine has been deliberately excluded from the Census?

Migraine Australia is urging people who live with migraine to ‘Fix Question 28’ of next month’s Census, by asking for a paper Census form and writing in ‘Migraine’ on a new question about long term health conditions, and sign our petition demanding they be counted.

This wasn't an accident or mere oversight.

We want everyone to sign our petition asking for migraine to be counted, and ask for a paper form for Census night (which is August 10) so you can write in Migraine. Our understanding is there won't be a box where you can write in your conditions, just a check box that says 'any other long term health condition'. So only by getting a paper form can you write 'migraine' on the question.

Back when Migraine Australia first started in 2019, one of our very first supporters just by chance happened to be a participant in the testing of the census questionnaire. They alerted us to this new question on long term health conditions, and the fact that migraine wasn't included.

We reached out to the Australian Bureau of Statistics and they told us the question only included the most common long term health conditions.

But migraine is one of the most common conditions in the world - why have we been left out? The ABS staff were not able to provide me with a detailed answer, and told us to contact the minister that oversees the ABS, Assistant Treasurer Michael Sukkar.

So we wrote to the minister, and as you all know from your letters to the health minister, he didn't reply, but we got a letter from someone higher up the tree in the ABS. The answer we got was they started with the conditions currently included in the National Health Survey, and refined them for the census in consultation with stakeholders.

We didn't exist in 2018, we replied, there was no opportunity for us to be consulted. We pointed out migraine is more common than all the other diseases currently in the question. We pointed out the research flaws in the National Health Survey, which among other things dumps migraine in with back pain, evidence of that deeply held 'just a headache' stigma screwing us up again.

The ABS didn't care, the consultation was closed, they were done. So, we went back to the Minister's office, and also raised the issue with Health Minister Greg Hunt (Sukkar oversees the ABS, but Hunt has ownership of the National Health Survey).

To their credit, both Minister's offices did hear us on this point and agreed it was very important to have good data on migraine. Hunt's office ensured that they reviewed the questions on migraine and considered putting a new section on migraine in the National Health Survey. The public consultation on that has happened, but disappointingly, again, the ABS proposed to dismiss migraine to just a question in a section on chronic pain. We don't know yet what the end result was or what they have decided to do, but we made it very clear that migraine needed its own section, and that it is not a pain condition (while many do live with chronic pain, that's not what defines it, and not everyone with migraine experiences chronic pain).

Sukkar's office told us to go back to the ABS, and that there was to their understanding another round of consultations that we could have input to.

We went back to the ABS for the third time and were again told there would be no further consultations, migraine would not be in the Census.

So, dear migraine warriors, if the ABS won't fix Question 28, let's fix it for them.

First, sign this petition asking for migraine to be counted in the Census.

Ask your friends and family to do so too!

Then, request a paper form for Census night. You will be able to do this from Early August via an online form, and we'll give you those instructions when the form goes up.

Once you have your paper form, complete it as normal. On question 28 tick 'any other long term health conditions' and then write MIGRAINE on the question.

How do we know they will count it?

We don't. What we have to do is get as many people as we can to sign the petition, and lots and lots of people to request paper forms, so that we are heard. the only thing we can do now is pressure the minister to tell the ABS to count migraine.

If you would like to email the Assistant Treasurer Michael Sukkar and ask him to ensure migraine is counted in the census, he uses contact forms. The ministerial contact form is here https://treasury.gov.au/the-department/contact-us/ministerial-correspondence

Why does this matter?

As the ABS itself is very fond of saying, the Census matters because it influences lots of government decisions. This includes what gets funding, resources, projects and research... and what doesn't.

Have no doubt, the data from this question will be used in everything from departmental decisions to media stories on chronic health. Relegating migraine, one of the most common conditions in the country, to the 'other' column means that we will continue to be in the dark for at least the next 6 years. No funding. No headache clinics. No research. And yes, the fight for our drugs on the PBS will continue to be excruciatingly hard.

6 more years of reading news stories about chronic health conditions that exclude migraine because the data does.

6 more years of watching as asthma and diabetes and arthritis and cancer get almost everything they ask for while we get stuff all, despite the fact that there is more of us than all of them combined.

6 more years of migraine being dismissed as unimportant, insignificant, 'just a headache'.

Australian-first study aims to capture migraine burden in our community