There are many phases of migraine attack. 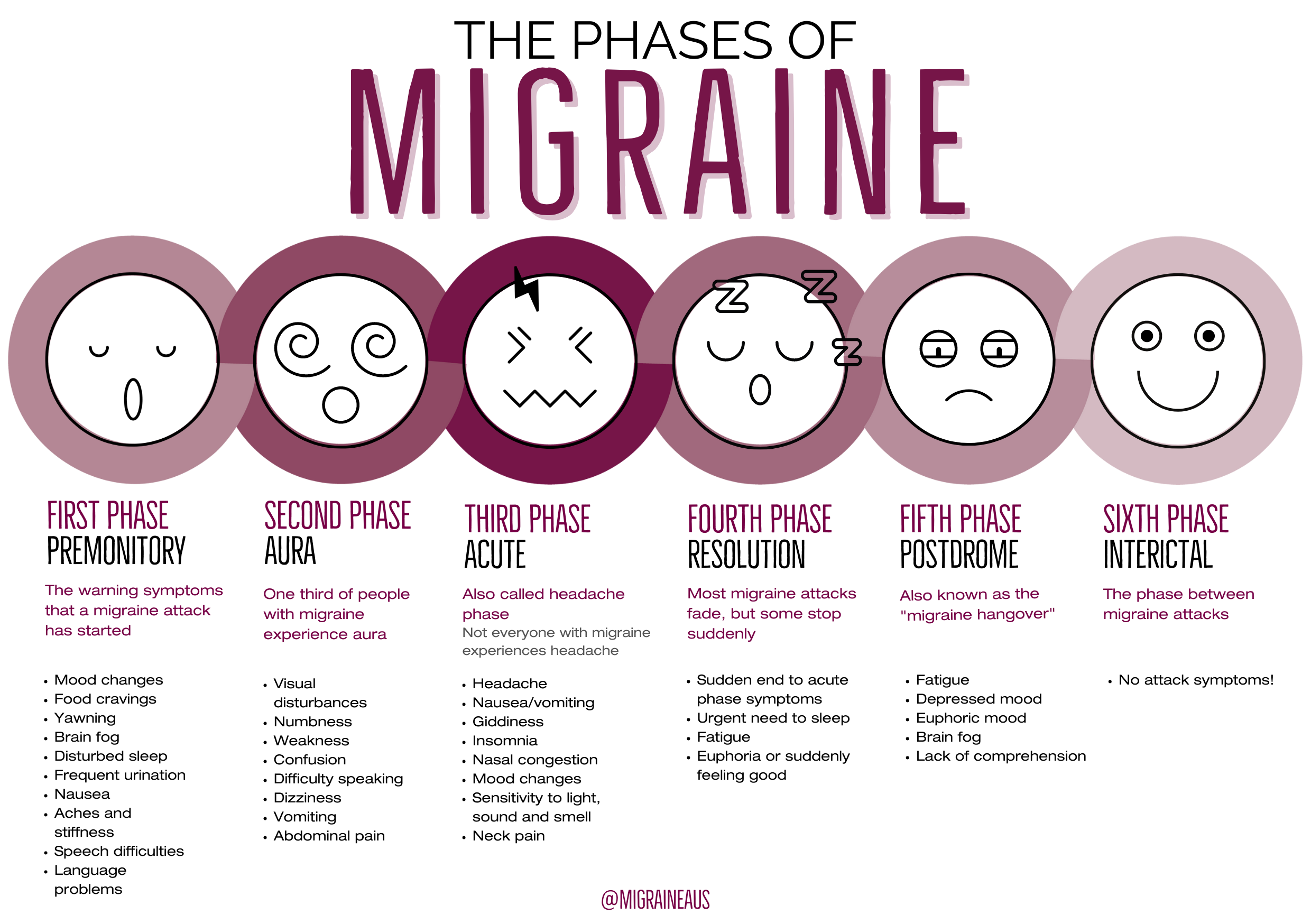 The first is the Premonitory phase or prodrome. This is also referred to as the warning signs but is more correctly the start of a migraine attack. You may be irritable, depressed, crave food, and many other symptoms that can leave you feeling ‘not quite right’. It is also possible to feel euphoric and have difficulty sitting still or sleeping. Most people living with migraine will get to know their own symptoms that come with the prodrome, and use them to know when they need to act to treat the migraine attack.

The second phase is the Aura. Only about a third of people with migraine get aura, but if they do, it is significant, and sometimes more debilitating and concerning than the headache. The most common aura is visual disturbances, such as seeing squiggly lines or circles or sometimes part of your vision being blacked out. Aura can also often be numbness and tingling in parts of the body, abdominal pains, weakness, disturbances in the senses like smelling strange things or not being able to taste anything, and loss of balance. There is a range of rarer types of migraine that more accurately describe these symptoms.

The third phase is Acute, also called the headache phase. Not all people with migraine get a headache, but it is a common symptom. During this stage, any combination of throbbing headache, sensitivity to light, smell and sound, and/or nausea is expected. Vomiting, light-headedness, pain elsewhere in the body, or mood shifts are also possible. This third stage is the part that typically lasts 4-72 hours.

The fourth phase is Recovery. Not everyone notices this phase, but for some people there is a definite point where the attack breaks, often by sleeping. Some people experience migraine euphoria, or suddenly feel very good!

The fifth phase is Postdrome – otherwise known as the migraine hangover. For some, this is worse than the headache stage, with depression and headache common, as well as significant fatigue, dizziness and confusion.

The final phase is called the interictal phase, which is a medical term that means between episodes or attacks.

Both the prodrome and postdrome can last for days or weeks. For some who get severe or chronic migraine attacks, there can be no or little respite from one migraine attack to the next.